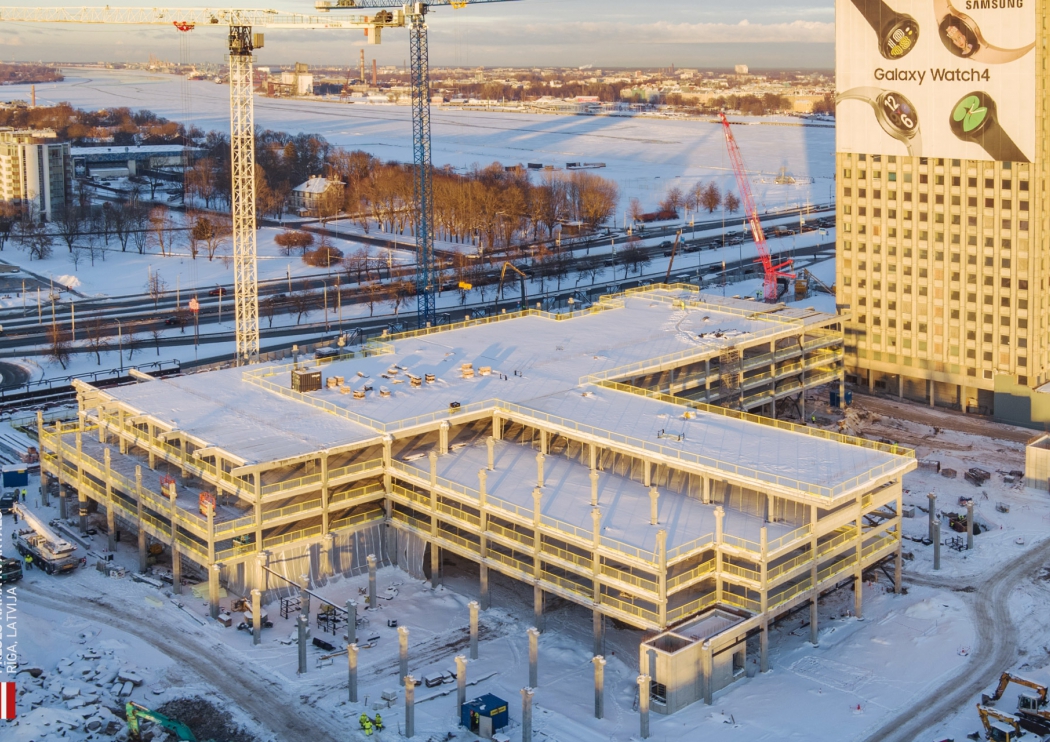 The unaudited consolidated turnover of UPB Group has reached 237 million euros in 2021, remaining at the level of 2020. Last year, also the highest amount of investment in the Group's history has been made – in total 17.6 million euros. Majority of this amount was invested in the construction of the new plant of prefabricated concrete structures in Liepāja.

“The year 2021 managed to surprise with challenges of such a scale, forecasting of which was virtually impossible. The most important task was to ensure the business continuity at plants and construction sites, and to maintain as smooth workflow as possible. Under such circumstances we achieved the historically highest level of turnover for the second consecutive year, which serves as a proof of the capabilities of our Group and professionalism of the team,” states Dainis Bērziņš, the Chairman of the Management Board of UPB.

“The most notable challenge was the unprecedented increase in the costs of raw materials and energy resources, which caused a huge tension in the sector. Neither customers, nor suppliers were prepared for such price increase; moreover, it is hard to foresee, how this issue will develop this year. It is clear that on the main export markets of UPB – the Nordic countries – there are mechanisms in place for successful solving of this problem, and it would be worth to apply these principles also on the local market,” explains the Head of UPB.

Riga of the Future and a plant for future products

In 2021, UPB commenced the work on several large-scale construction sites in Latvia. The largest of them is the 1st phase of Preses Nama Kvartāls, which involves construction of a modern Class A office centre and a multifunctional centre. The class A office centre is constructed in compliance with nZEB standards, and it is also planned to obtain “Excellent” standard of the international BREEAM certificate, thus promoting trends of sustainable construction on the local market. Moreover, the Preses Nama Kvartāls is one of the first projects of such a large scale in Latvia.

At the end of the year, the new plant of prefabricated concrete structures was opened in Liepāja, in the construction of which several UPB companies were involved in order to integrate and efficiently complete as many works as possible within the framework of our Group. 12 million euros were invested in the construction of the new plant, one third of which is composed of investment in technologies, for example, in a modern and highly functional concrete batching plant, fresh concrete processing and water treatment systems and other equipment. Great attention was paid also to ergonomic solutions.

“The new plant is designed so that it enhances the competences of UPB in manufacturing of different complex prefabricated concrete structures, which is our focus on foreign markets. Seeing the trends demanded by customers and our project portfolio that forms for the coming years, we are unable to compete with simple prefabricated concrete solutions. Increasingly more different hybrid elements and products with high added value appear on the market,” indicates Dainis Bērziņš.

Demand for the three-construction solution of UPB increases

In terms of the export market, the year 2021 can be described with growth in the implementation of three-construction (concrete, metal, glass) solution projects. In such projects the customer entrusts to UPB a broader volume of works, thus gaining more efficient work organisation at the construction site, faster progress of the project and other advantages. The largest among the three-construction projects were Clarion Hotel Draken in Gothenburg, Forum Medicum building for Lund University and a new science building for the University of Gothenburg.

In the autumn, works on the highest building so far, for which UPB has manufactured, supplied and assembled prefabricated concrete structures – the 36-storey high-rise building CityGate in Gothenburg, Sweden – were completed. Also the biggest project to date in the United Kingdom – the façade of Bloom Clerkenwell office building in the centre of London – was completed. Last year and also this year, active work continues on the project Hyllie Terrass in Malmo, which is a candidate for the status of the first climate neutral office building (NullCO2) in Sweden, thus proving once more the topicality of sustainability both in construction and building materials manufacturing areas.

Trends for this year – sustainability and Design&Build projects

As told by Dainis Bērziņš, the impact of the pandemic on the construction sector gradually takes shape. Developers assess changes in habits of people, adapt to the new reality and, consequently, also activity in the office construction sector starts to appear. The interest grows most rapidly exactly in green construction and Design&Build areas, in which also UPB Group companies operate in a targeted manner.